I was a very lucky girl. I grew up in Benin, West Africa, in the middle of a big family, filled with love.

We were 10 children: seven boys and three girls. Even though we were not rich — my dad worked at the post office — our life was full of joy.
As a child, I always felt a deep sense of security: The neighbors were friendly, and they would look out for us when we were out roaming the streets of Cotonou, our economic capital. Around that time, I started singing on stage in my mother’s theater troupe. I was 6, and everyone thought it was cute.
Then, everything changed when puberty kicked in. I suddenly felt that my fame as a singer was now a curse. Other kids in the streets would call me a prostitute and spat at me.
One day, after such an episode, I came back home, running and crying. When my grandmother asked me what was wrong, I said that I wanted to stop singing. She told me, “You cannot be loved by everybody, and never let anyone define who you are and who you want to be.” 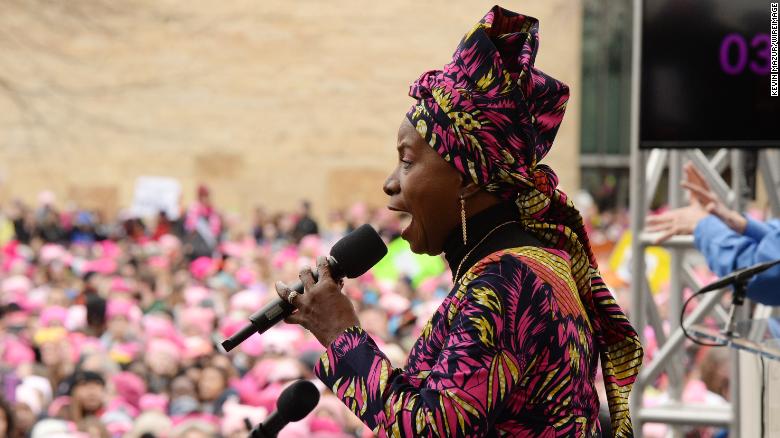 In junior high school, things were no prettier. The fact that there were so few girls made us feel that we didn’t belong there and that our place was in the kitchen. The boys in the school regularly bullied us. They would taunt us and try to look under our skirts.

We felt powerless because we were outnumbered, and the people running the school didn’t care. I couldn’t understand what was happening because I’d always been a tomboy (I used to tell my mom, “When I grow up, I want to be James Brown!”)
This was the moment that I — along with two of my girlfriends, Yolande and Mathilde — discovered the power of female solidarity. We were inseparable and supported each other. People called us the three musketeers.
After another day of harassment from the boys, I asked my dad if I should get into a fight at school to defend my pride. He told me, “Physical fighting won’t get you anywhere. Use your brain. It is your ultimate weapon.” The next day, I went to school armed with a word I had made up: Batonga.
It meant: “Get off my back, I can be whoever I want to be.” I told Mathilde and Yolande that the next time the boys came to taunt us, we should shout that word to confuse them. It worked.
Many years later, I was appointed goodwill ambassador for the United Nations Children’s Fund, known as UNICEF. I have since traveled all over Africa to promote primary education for girls. I saw its impact but understood that this, in itself, would not be enough.

When a girl finishes primary education, she enters the danger zone of early marriage, which I escaped thanks to the support of my dad, who made sure all his girls attended high school.

My experience inspired me to create — with the help of Mary Louise Cohen and John Phillips — a foundation to promote secondary education for girls in Africa. The name for the foundation came naturally: Batonga.
Helping adolescent girls go to school in Benin is not an easy task, but over the years, I have seen the impact that education has had on the girls.
Their confidence has increased dramatically. Traditionally in Benin, young people are not encouraged to express themselves in front of grown-ups. But lately, I’ve noticed a new level of assertiveness when I meet some of the girls supported by our programs. They meet in “Girls Club” and benefit, just like I did, from female solidarity.
Female solidarity has been a constant presence in my life, from the advice of my grandmothers to the mentorship of South African singer Miriam Makeba.
The highpoint of female solidarity for me took place on January 21, 2017, when I had the privilege of singing “A Change Is Gonna Come” at the Women’s March in Washington in front of hundreds of thousands of people. I felt a lot less powerless on that day.

I truly believe in the empowerment that education brings to girls. And I believe that the strength of female solidarity will change the face of Africa.

Editor’s Note: Angelique Kidjo is a Grammy Award-winning singer-songwriter. She has been a UNICEF goodwill ambassador since 2002. The opinions in this article belong to the author.