Christina Sass, 38, is the cofounder and president of Andela, a for-profit business based in New York and Lagos, Nigeria that trains software developers in Nigeria and Kenya. Founded in 2014 and funded with $80 million in venture capital from Google Ventures, the Chan Zuckerberg Initiative and others, Andela supplies developers who work remotely from Africa for companies around the world. In turn, Andela collects full-time salaries for its workers, distributing a third of the salaries to the workers and using the other two-thirds to pay for sales, marketing, overhead and expanding the company. While they are going through Andela’s six-month training program, new hires get a MacBook, subsidized housing and two meals a day. Employees commit to staying with Andela for four years. After that, they’re free to work directly for the companies that hire them. Andela currently has 900 employees, including 300 developers working for outside firms, 300 developers in training and 300 staffers. Forbes estimates Andela’s revenue is close to $20 million. Sass is a veteran of non-profit work that included three years as a program director at the Clinton Global Initiative. In this interview, which has been edited and condensed, Sass talks about the advantages of being a for-profit .

Susan Adams: Tell me about your background.

Christina Sass: I started out as an idealistic educator in my home state of Georgia. Later in China I built my own program affiliated with a private school. In the Palestinian territories, I helped build a new youth leadership training NGO and in Kenya I built an information and technology training program for women. The short version of my career is that I got to talk to thousands of young people and the conversation always came back to the fact that they had endless persistence and drive but their education systems were incredibly disconnected from the job market.

Adams: How have you addressed that disconnect?

Sass: I focused my career on preparing young people for market opportunities that were realistic and achievable.

Sass: Employers always want two to three years of experience or they require knowledge of cutting-edge technologies that are not taught or they require experience building products on teams. But none of that experience is possible to get in academic environments.

Adams: How did that lead to Andela?

Sass: In January 2014, I brought a group of leaders from the African continent together to think through challenges. My cofounder Jeremy Johnson was with a very successful ed-tech company, 2U. It builds online masters’ programs with Georgetown and U.C. Berkeley. We knew each other through an entrepreneurship network called the Summit Series, and we were friends for years. I saw the success of 2U and asked him to think through the lens of harnessing extraordinary talent in Africa. That’s how we got to see the global talent shortage for software engineers. In Africa we have a huge youth population with a foundation in computer science and engineering. We thought we could bridge that gap.

Adams: Where did you get the name Andela?

Sass: It was inspired by Nelson Mandela.

Adams: If your cofounder was in the U.S. and you were in Africa, how did you coordinate?

Sass: I was in Nairobi and invited him to come and speak. We went to see some modern computer labs and we talked to women technologists there. I took him to see a bunch of different technologists in Nairobi. Then we started problem-solving on what our project would look like.

Adams: How did you get the company off the ground?

Sass: In May 2014, we did a pilot where we asked for applications from young technologists to spend time with us and then work for global companies. We got 700 applications in the first cohort. Then we got more organized. For the second cohort, we used a problem-solving and reasoning test that’s like a proxy for IQ. We got more than 2,500 applications. From that pool, we chose 48 candidates.

Adams: What did you do for funding during that period?

Sass: We were spending our own money and actively talking to the investment community about this idea. Every single venture firm needed top tech talent. They were struggling to find people in New York, Austin, Salt Lake City.

Adams: Were you pitching them both for money and to use your services?

Sass: Yes. We knew the idea was sound.

Adams: How did you put together the training program?

Sass: We hired learning scientists in Lagos and globally who built out a curriculum.

Adams: Were you able to raise capital at that stage?

Sass: We raised a $3 million seed round very early.

Adams: What was your pitch to investors?

Sass: Our model would give companies access to a huge pool of untapped talent globally. By spending a handful of months with a particular kind of learning science, we would be able to use our candidates’ foundation, make them extremely competitive and place them as full-time remote team members with growing tech companies across the world.

Adams: Was part of your pitch that companies would be able to hire your workers at a discount?

Sass: That was never the goal. The cost of an Andela worker may be cheaper than a top-level developer in San Francisco. But that’s not the reason to hire our people. They should look at our people through the lens of diversity. The U.S. has 1.6 million open software developer jobs right now. Growing companies are not going to be able to fill those jobs with local hires. There are five open jobs for every one software developer.

Adams: Now that you’re working on a for-profit venture, how does your motivation differ from when you were working for non-profits?

Sass: Our mission statement is to advance human potential by powering today’s teams and investing in tomorrow’s leaders. I worked in some of the toughest places in the world, where there are too many problems to count. The true antidote is to have a bunch of scalable problem solvers who are building technology that scales.

Adams: Are you saying that your workers are going to save the world?

Sass: In five to 10 years I hope you and I are talking about the companies that Andela grads have launched to solve problems in global health, global energy shortages, and in the technologies we need to get to last-mile customers across the African continent. In the short term, we see this as a much better way to make any software developer a better technology leader. They need to build real products inside real companies and apply those learnings in different environments. Academics is not sufficient. You can’t learn software development from a book.

Adams: What makes you think your employees are going to become entrepreneurs?

Adams: Your employees only collect a third of the salary they’re paid by the companies that pay them, while Andela pockets two thirds of that amount. Is that fair to your workers?

Sass: In their local markets, they’re making more than they would at a local startup, but less than if they worked for an international company. Their commitment to us is four years. After that, they’re welcome to work directly for the company.

Adams: What’s been the toughest part of building Andela?

Sass: Lagos is a challenging environment in terms of logistics. But the caliber of talent made it worth it. They’ve had a background of corrupt governments that the youth population is determined to fight against and change. Lagos is more entrepreneurial than New York in a lot of ways.

Adams: How large do you want to get?

Sass: We want to have upwards of 5,000 developers in the coming years. We’re looking to scale to other countries. The sky is the limit. 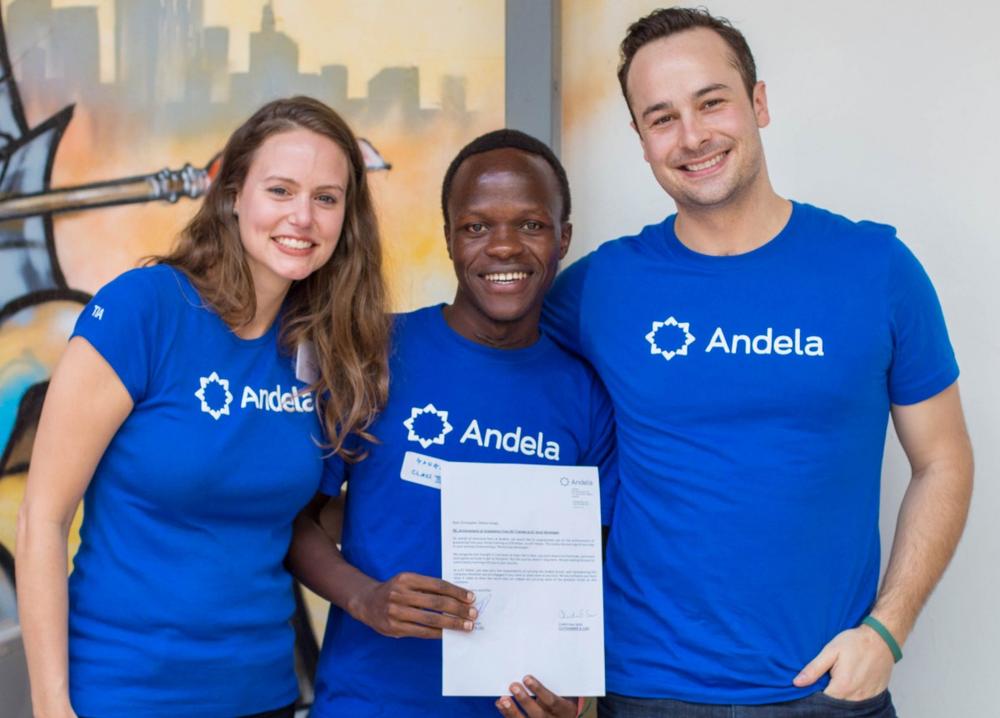